After a marathon listening spree, @the_dt_show, decided to review the Can’t Get a Job on the Radio Podcast. Here’s what he had to say:

I did it.  I completed a marathon of the “Can’t Get a Job on the Radio Podcast.”  I rubbed my face, closed the browser, shut my laptop and looked in the mirror – at a stranger.  My eyes – hollow and blood shot; my beard… dear God, my beard was grey.  The light flooded in, temporarily blinding me as I opened my bedroom door.  I discovered that my roommate had moved out and a family of Guatemalan day laborers had moved in.  What the hell happened?   How long was I sequestered in this self-imposed hermitage?

I guess, you can say it all started when I met CJ Morgan at a KLBJ remote at Little Woodrow’s in Austin, Texas.  I’d been following him on Twitter for some time and have heard Dudley and Bob give him shout outs on their morning show as well.  So there he is and we chat for a while, I end up giving him a few bucks for his broken wiener (dog not dick) and I tell him I’ll give his podcast a try.  At the time I was in the middle of two other podcast marathons and was unable to listen to CGJRPC until a couple of weeks ago.  It was worth it.

Billed as two guys in Radio who can’t get on the radio, but work in radio (paramount to two dudes wanting to get laid but settle for a blow up doll); CGJRPC is possibly the most creatively designed podcast that I have listened to in that they actually mimic a live radio broadcast.  They play spoof commercials during the breaks; and for some reason that I’ll never know, Hwy 71 has become an economic hotbed for wolf urine manufacturing, foreign owned karaoke bars, and German sausage factories?  Not this guy.

What is fascinating about the podcast is the level of intelligence that is expressed by CJ and his partner (broadcast not life), Chuy Whatshisface.  Sorry Chuy, I forgot your last name and quite frankly, I’m too much of a Gen-Xer to actually look it up.  Anyway, early on, these tidbits seemed to be few and far between, being liberally sprinkled between bits about dropping deuces and jerking off.  The latter topics have tapered off a bit – much like a pinched turd since episode 20ish – not that there’s anything wrong with shit and cum jokes; it’s just cool to see the depth of the dynamic duo as they take on fairly serious current event topics like SOPA/PIPA and the Republican primaries.  The podcast has come into its own over the course of their 40+ episodes.  CJ and Chuy have refined the process and outline of the show.  They retain signature bits like “Pinging the News,” and “Damn that’s Crazy.”  They have added a new bit called “Eating with Lamar” which, ironically, makes me never want to eat again.  The character sounds as if he is about to succumb to CPHD (Google has the answers).  Let’s not forget “First World Problems,” though I think that was more of a situational bit.  It had me rolling on the floor, laughing my ass off.  Or as the youngsters say ROFLMAO.

I have listened to podcasts that are an hour long and some a bit longer than that.  I have also listened to ones the length of CGJRPC.  I think for them, the half-hour length is great.  They pack the content in and leave the listener wanting more.  At least I do; hence my opening paragraph.   What it boils down to is hustle and flow.  They hustle for thirty minutes and it flows really well.  Early on, CJ allegedly had other people sit in the cohost chair, but I think Chuy is the best fit, and I am glad that he’s the permanent cohost.  They play off each other well and Chuy has a talent for coming up with punch lines for news blurbs.  I think one day in the future some late night talk show host will be telling Chuy’s jokes in his monologue.  This would be great for Chuy but for us listeners, it will be sad, sad day.  Let’s not dwell on the bleak Chuy-less future.  Rather, let’s focus on the present, and the present is filled with Chuy goodness.

CJ is no slack either and his skills are aptly applied to the previously mentioned commercials, and bits like “Eating with Lamar.”  In fact if you listen closely you’ll notice that it is CJ’s voice behind many of the digitized audio enhancements of the commercials and bits; and unlike an Italian ship captain, CJ drives the show from beginning to end – keeping things on track.

I have since recovered from my sequestering.  The color has returned to my face, my weight is back up to normal, and I no longer have any adverse reactions to light.  It was worth it.  Now can those fuckers produce the Can’t Get a Job on the Radio Podcast consistently? 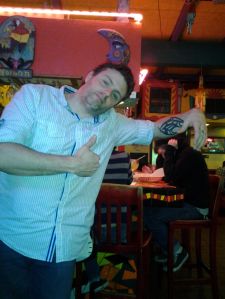