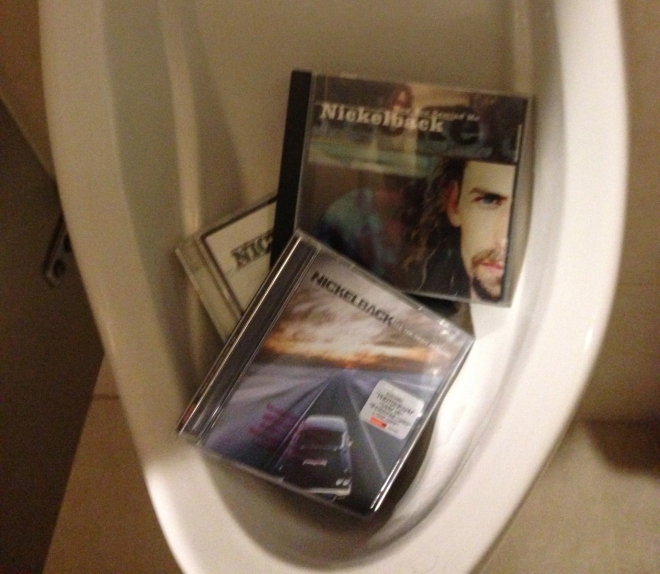 Does your taste in music reflect your personality? According to an article on howaboutwe.com, it does.  If you like Nickelback, you “You have low self-esteem and bad tattoos” and you are probably kind of a loser. What bands do you identify with?

Bruce Springsteen: You’re a monster in the sack.

Jay Z: You don’t take any shit. Or at least you know that you’re not supposed to.

Beastie Boys: You believe that loyalty is rewarded.

The Arcade Fire: You spend the first third of relationship in a romantic frenzy and the last two trying to justify it.

The Ramones: Unless you’re over 40, you’re trying to be cool.

Rush: You’re a man. And a nerdy one at that.

AC/DC: If you’re a woman, you’re the kind of person who lets a guy move in with you after three dates because he’s temporarily homeless. If you’re a guy,

My Chemical Romance: You’re not so much looking for a boyfriend or girlfriend as someone to share a “fuckyeahsuperheroeskissing” Tumblr with.

Hall and Oates: You’re not the type to let your wistful nature ruin your good time.

LCD Soundsystem: You’re not the type to let your strong sense of irony ruin your good time.

Judas Priest: At some point in your life, you’ve sniffed a little glue.

Belle and Sebastian: If you hook up, it’s gonna get weird.

The Shins: You either really liked “Garden State,” or have a giant chip on your shoulder about how people only like The Shins because of “Garden State.”

Tori Amos: You cry during sex and get real quiet after.

That One Peter, Bjorn and John song with the whistling: You’re a human being.

The Mountain Goats: You’re very serious about your feelings.

No Doubt: If you’re a girl, you’re a confident person, but you know what it’s like to get treated like crap. If you’re guy, you’re just trying to get laid.

Radiohead: You’re angry and hurt. But you’re open to getting some professional help.

Bebel Gilberto: You’re going to flutter little kisses all over every inch of your date’s body and soon as you get the chance. Also: You’re a foodie.

Bob Dylan: You’re an asshole, but you don’t know it.

The Strokes: You’re not really an asshole, you just act like it sometimes.

Nickelback: You have low self-esteem and bad tattoos. But, god bless you.

The Clash: You’re willing to work for it, but you’re kind of pissed that you have to.

The Cure: You fall in love WAY too easily.

Best Coast: You fall in love way too easily, but only for, like, a week.

Beyonce: You’re sweet, but not a pushover.

Britney Spears: If you’re a gay guy or a woman, you’re normal. If you’re a straight guy, you’re trying to get laid.

Guns N Roses: You’re going to have to sex in the bathroom and regret it.

Joan Jett: You’re going to have sex in the bathroom and not regret it.

Jewel: Um… are you sure this is a date?

Regina Spektor: You might be a perfectly nice person, but you’re kind of annoying.

Panda Blood: You made that up to see if your date would pretend to have heard of them.

Kid Cudi: No one understands you. But it’s not that big a deal.

John Legend: You have emotional sex.

Eminem: You have emotional problems.

Drake: You’re about whatever.

Vampire Weekend: You’re about being about whatever.

Gogol Bordello: You sweat a lot and you have a nice smile.

Peter Gabriel: Every relationship is a coming-of-age epic of which you are the star.

Leonard Cohen: You’re the kind of person that people get obsessed with for years. Too bad you’re too depressed to appreciate it.

TV on the Radio: You care. Deeply. Even if you act like you don’t.

The Smiths: It’s doomed every time, but it always takes a beautiful, long while to figure that out.

Depeche Mode: You’re screwed up, but you know it, which actually does help.

Cut Copy: You make out in public a lot.

Joni Mitchell: You make breakfast in the morning.

The Beatles: Eh. Who knows.