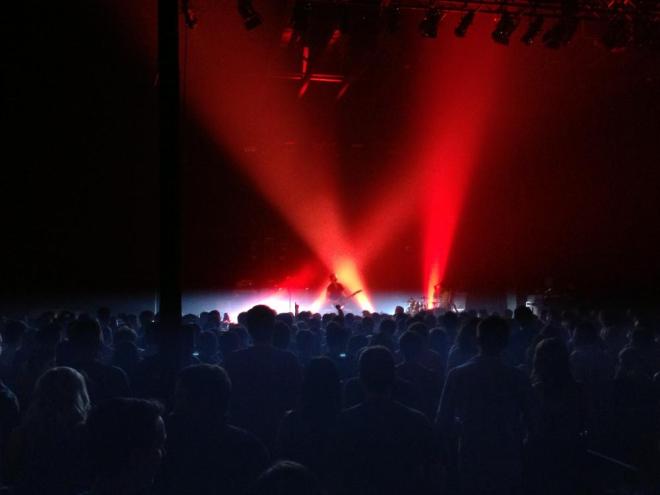 This was one heck of a year. They say your 30’s are when you really begin to experience life and I would have to agree. It’s not easy to remember what I’ve done over the course of a year, but like a flash drive, songs store my memories and bring past experiences back to life. Events coincide with music, like a soundtrack to the CJ Morgan movie.  Here are the top concerts, albums and songs that influenced my memories the most during 2013.

I missed Twin Shadow the year before and was not going to do the same thing this time. I bought my tickets back in December of 2012 and eagerly awaited Twin Shadow’s return. They played their 3 most well known songs right off the bat (which was kind of refreshing – usually your left anticipating the “hits”) and the rest of the show turned into a dance party.

Another act I wanted to see was My Morning Jacket’s front man Jim James who released a solo album and just went on tour. The show did not disappoint. It’s extremely rare I watch concert videos but I was left a we struck by several impromptu drum and guitar solos that I could only find online.

When I go to a show, I am always thinking and planning my next move. “When should I go pee, get another beer… should I move to another spot… what song is next… time to leave etc.”. Sometimes and rarely, I completely lose myself in during a show. That was the case when I went to see Sigur Ros. It was the perfect mix of timing, life circumstances and music. The entire show I was mesmerized. After the last encore song, I was disappointed. I didn’t want it to be over! I spent the next week or so watching the band’s concert clips and sharing their new post rock – apocalyptic songs with my friends. It’s going to be hard for any show to beat this one – not just because of the performance, but the perfect mix of what was happening in my life at the time.

3) Sigur Ros – Kveivkur
Their concert set the tone for my instant fandom (though I’ve always liked Sigur Ros). Their latest album, pronounced quaker, is much darker and post rock than anything they’ve done before. I waited all summer for it to arrival in the mail, even ripping songs from YouTube videos.

2) Daft Punk – Random Access Memories
When RAM first came out, I was disappointed and didn’t understand the hype. Then I caught the last 30 seconds of Instant Crush on the radio. Get Lucky was also getting a lot of radio play – and I thoroughly enjoyed the fun of it.  I also picked up on Lose Yourself to Dance and Give Life Back to Music. Then randomly one day, I heard Motherboard. At the end of the year I discovered – and fell in love Doin’ it Right.

1) The National – Trouble Will Find Me
This is by far the most complete album I listened to this year. The National yielded several solid songs and a few of my favorites from the year.

25) Colette – When the Music’s Loud
I discovered this song on a friend’s Spotify playlist. It set a theme for the year:  Not giving a fuck when the music’s on.

23) Lorde – Tennis Court
In my opinion, this is by far the best song on Lorde’s overhyped debut. I heard it on the radio as a “b” or other track.  It certainly deserves more attention that it got in 2013.

22) POLIÇA – Tiff
One of my worst radio interviews was with Polica during ACL Fest. It was awkward at best. This song, which I sought out on Spotify Radio, makes up for all of that.

21) Majical Cloudz – Childhood’s End
I had never heard of Majical Cloudz until this year. A friend had an extra ticket to some show at Red 7 and asked if I wanted to go. I assumed they were a rappers or DJ – not at all what I expected. I loved every minute of it, especially this song.

20) The National – I Need My Girl
My ex girlfriend heard this on the jukebox at work and texted me the YouTube video right as I was listening to another National song (Don’t Swallow the Cap). Naturally, I liked this song a lot more.

19) Freelance Whales – Locked Out
The first song I played obsessively on repeat for 2013 was late 2012’s Locked Out. I thought it would be my “top song of the year”. Turns out there were a few others I liked better.

18) Daft Punk – Doin’ it Right
Yet another great one from a great album. I play this song almost every time I get ready to go out (yes, I am a woman). If I had discovered this song before November, it would probably rank much higher.

17) Atoms For Peace – Dropped
“FLEA’S IN ATOMS FOR PEACE WITH THOM YORKE!” That was my first reaction to seeing them at ACL Fest this year. My second involved a jaw dropping and hips shaking. The best song from this ‘super group’, Dropped, was stuck in my head days after leaving Zilker Park.

16) Grizzly Bear – Yet Again
Yet Again was one of those songs I would play when I was “reflecting” or in a certain solemn mood. Though it came out in 2012, I really didn’t discover it until 2013 while burning some mix tapes and looking for more songs.

15) Arcade Fire – Reflektor
Reflektor was one of the 2013’s most highly anticipated albums. I wouldn’t call it over-hype, as Arcade Fire is one of the great modern rock bands, but the album seemed to lack that same urgency and identity that previous records had. Except for the title track. Reflektor seems to tell a tale of Win Butler and Regine Chassagne coming to some sort of ending or crossroad in their relationship.

14) Son Lux – Lost It To Trying
Sometimes a song comes on that let’s you know everything is going to be all right. That’s the vibe I got the first time Lost It To Trying came on Spotify Radio. I’ pretty sure I only listened to this song for several days in a row.

13) Sigur Rós – Brennisteinn
Finally, some of the dark, apocalyptic post rock that I love has made the list. When I was in a bad mood or angry at life, I would usually start my day with this song. It was also the back ground music for my first painting.

12) Haim – The Wire
I first considered this song a guilty pleasure. Something I would be embarrassed to listen to out loud. Then I discovered the rest of Haim and realized I had nothing to fear. This is one of many songs I remember desperately trying to Shazam in time. The last minute (which is what initially hooked me) is incredible fun.

11) The Neighbourhood – Sweater Weather
Many of the songs on my list are influenced by a relationship I had over the past year. Some are angry, some are sweet and others are just so romantic the only term I can use to describe them is “queefy”.

10) Arctic Monkeys – Do I Wanna Know?
The churning guitar riffs and trance like drum beat seem to capture the angst and inevitable helplessness of marching back into the black hole of a relationship. Though the song is now incredibly over played, it is the best Artic Monkeys tune to date.

9) Sigur Rós – Kveikur
The absolute best songs are the ones discovered while watching live music. The title track of Sigur Ros’ latest and darkest album is six minutes of pure post rock chaos. I discovered the song while watching Sigur Ros at the Cedar Park center in April. The lights, screen, haunting vocals, driving rock and orchestral arrangements stuck with me for weeks

8) Keep Shelly In Athens – Recollection
Whimsical, transcendental and mystically hypnotic are a few fancy terms I would use to describe this song. Without being too personal, it helped me cheer up during a few dark moments. This, like many songs I discovered this year, came from my friend John’s blog http://sideonetrackone.com.

7) Yeah Yeah Yeahs – Sacrilege
The music video sold this incredible song to me. The Yeah Yeah Yeahs set the tone for their album and SXSW performance with this unorthodox piece. Sacrilege and Do I Wanna Know certainly are two of the ‘coolest’ songs on my list. I would certainly feel comfortable jamming them and cruising around with the top down. If I had a convertible.

6) Twin Shadow – Old Love / New Love
It’s no secret (if you follow my MixTape podcasts) that I am a huge Twin Shadow fan. This underrated song, like many others from the Grand Theft Auto V soundtrack, did not make any of the big year-end lists. It’s not only one of the best from 2013, but one of Twin Shadow’s finest tunes.

5) Daft Punk – Instant Crush
I heard the last 30 seconds of this song while listening to the radio in my car. I scrambled to get out my phone and Shazam it but was too late. A week later I heard it again and was floored to find out it was Daft Punk with the Stroke’s Julian Casablanca (as I had just completely dismissed Random Access Memories). The last 30 seconds alone make a great song, but the entire piece is magnificent to an ear as weird as mine. Even with the washed out vocals and beat.

4) Jim James – Know Til Now
In 2011, My Morning Jacket’s Holdin’ on To Black Metal took the top spot on my countdown because I like front man Jim James and I like it when he gets weird. Though this song isn’t too out there, I liked it enough to proclaim it the best of 2013 all the way back in March. Unfortunately for James, A few others beat out Know Til Now.

3) Dan Croll – From Nowhere – Baardsen Remix
I would describe Dan Croll as one of those sweet Bon Iver-esque artists that college girls would listen to. His second single, From Nowhere, got a bit of airplay on the radio – and in itself is a great tune. It wasn’t until I heard this remix while playing Grand Theft Auto, though, that I too began to swoon over Dan Croll.

2) Major Lazer – Get Free – feat. Amber of Dirty Projectors
Two years in a row Major Lazer made the top three of my year-end list. What does that say about my taste in music? I guess I’ve drifted a bit too electronic but this catchy tune is simply gorgeous. The story it tells, Diplo’s unique EDM flavor, the reggae/dub beats – and especially Amber Coffman’s vocals. I’m in love.

1) The National – Sea of Love
Without hesitation, any debate or doubt, Sea of Love was my top song going into creating this list. If one song were to sum up my year, the failed attempt at love, struggles at work, the downs, incredible ups and amazing fun I had during the year – this is it. The song specifically brings me back to June and driving back from a weekend at a friend’s lake house. The events of that weekend and this song seem to tell the story of 2013 perfectly.