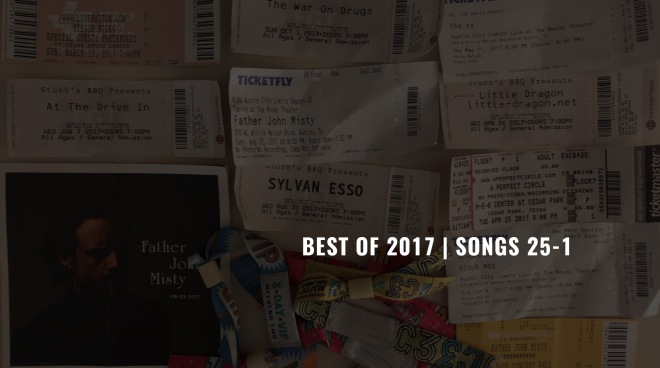 I am not a writer, a music critic, or a tastemaking social influencer. I just like music. I live my life listening to hundreds and hundreds of new songs each month. Occasionally, a handful of songs make my MixTapes.

They are the sound track to my life.

In 2017 I experienced a rather large chunk of turmoil culminating with the passing of my beloved best friend, Miles.

Thankfully, I had these songs to help me get through it all Here are my top 25 for 2017 (click here for Spotify playlist)

At the risk of repeating myself, I must tell you to listen to this one until the end, and again and again! It just gets better as it goes on.

A spacey EDM track from Slow Magic’s Float. Doesn’t it sound like something you would want to hear in a float tank?

Die Young was the first big single in 2017 for one of my favorite duos, Sylvan Esso. It has been a pleasure watching this band grow and grow every year!

Tough call on whether I wanted to use the song Seattle or this one (I know, that’s not how lists are supposed to work). Went with this and I think you will approve!

This song bumped up a few notches after seeing it performed live (while going up against Jay Z) at ACL Fest.

Is slow burner the term for a song that starts of mellow and ends so majestically? Either way, the ending is what hooked me on this one from the delightful trouble maker Ryan Adams.

A lot of replay in a little bit of time catapulted this song into my top twenty.

It has been a theme of this list: my love for the last half of a song. The same theme applies to almost every track on A Deeper Understanding. Put this one on and go for a cruise.

I can only imagine how awesome this song would be to see live!

My favorite song from Cults end of summer release Topic.

It was a depressing year. This song echoes how some of us feel most days. “Woke up because I only thought I had to.”

St. Vincent storms back with another fantastic album. Here is my favorite from MASSEDUCTION.

This song reminds me of March, SXSW (seeing SOHN), and drinking waaay too much at the Mohawk and fighting with my poor girlfriend because I didn’t want to go home.

It might be a bit strange to call my number nine song of the year a “background” tune but it kind of was. Man of Oil was the second song on my second most played MixTape, right after my most played song of the year. Don’t get me wrong though, I love this one from Animal Collective (thus the placement).

Oh fuck does this song just fit this year, this garbled life, and the overall jaded chugging along of the student debt riddled millennial generation.

Another song that brings out the pessimistic outlook many people have on our crumbling American society from Austin’s own David Ramirez.

Gidge are a Swedish EDM duo unlike anything else I’ve listened to. While enjoying some LSD, cleaning house, and mounting my new sword on the wall; I decided to check out their just released EP LNLNN. This song floored me. Imagine, if you will, climbing a glacier in Iceland with a giant battle axe strapped to your back.

It is funny that the best song from the xx’s I See You was on the deluxe version and not included on the original album. Listen to the entire thing and tell me if you disagree (you won’t).

And now, here we are: the top three. Three of the most played songs of 2017, three that could easily be switched around, and the three that had the most meaning to me.

03) The War on Drugs – Strangest Thing

Listen to this on repeat, listen all the way through. Strangest Thing is such a beautifully building song and the stylistic centerpiece for my top album of the year, A Deeper Understanding.

02) The National – The System Only Dreams in Total Darkness

Sometimes you hear a song and just know it is going to be the best that year. This is true for The System Only Dreams in Total Darkness, which topped several national countdowns and really pushed Sleep Well Beast. It also happens to be my most played song of 2017 (according to Spotify).

“That was the last New Year I’ll Ever See.”

2017 was a bitch of a year. Our heroes died in 2016, and now we are left floating in this flaming garbage can asking “What’s next?”

Well, I already knew what was next. I had no intention of finishing out this year, of seeing another stupid New Year.

This song is important to me because I was listening to it during a very difficult time; the month or so in Spring when my long time companion, Miles, was dying. He would get better, worse, then better, and worse (even on his last day, after I had made the appointment at my home, he was hopping around in a good mood).

The music helped me think, grieve, and cope. I still, right now, get choked up listening to So I’m Growing Old on Magic Mountain (even cried loudly during FJM’s ACL Live taping). The song itself addresses so many issues we all face while aging and moving on.

Through the haze of depression I found hope and happiness in my love, my friends, and my family. Here is to 2017, and a better 2018!

TOP SONGS OF YEARS PAST

2011: My Morning Jacket – Holding on to Black Metal